To call Ramsi’s Cafe on the World a cafe is something of an understatement. It’s more of a palace.

Lavish art work accents the high ceilings. There’s a huge, floor-to-ceiling bookshelf. On the way to the parking lot, we saw a toppled statue and some palatial doors that seem to have been abandoned. The place is a visual feast as well as a feast for the palate. 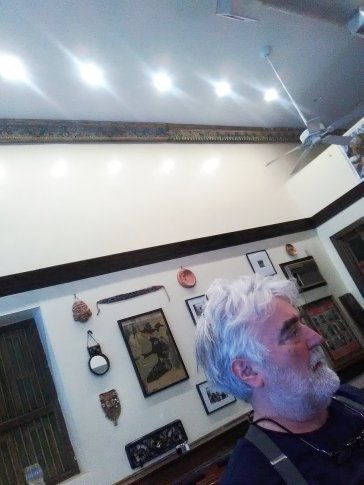 We like to sit at the bar which is, arguably, the best spot for basking in the sheer beauty of the restaurant and people watching.

Vegan at Ramsi’s Cafe on the World

On a recent visit, I had the sari wrap. I expected something fairly modest. Like a sandwich I could pick up.

Instead, what I got was a platter full of food with saffron rice and a sauce that was better than crack, along with some really delicious chutney.

Inside the wrap was a really generous mixture of potatoes, chickpeas, green peas, and basil leaves. This confection has a little bite to it, but not overwhelming. Just enough to contrast nicely with the tzatziki. 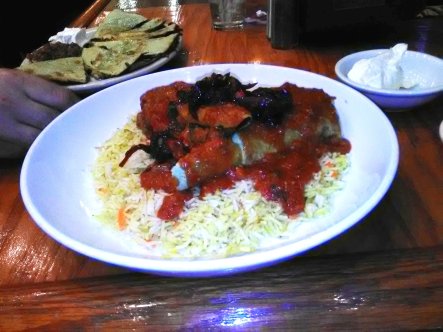 And I happen to know, from previous trips, that Ramsi’s is one of the few Louisville restaurants that stocks vegan mayonnaise. I’m also impressed that Ramsi’s Cafe on the World has pulled its self together to label entrees on the menu as safe for people with various dietary needs. In other words, vegan food is labeled “vegan” and gluten free food is labeled “GF.”

This is a wonderful help to customers who don’t have to hem and haw and ask for a full ingredients list.

Vegetarian at Ramsi’s Cafe on the World

The crime partner got a vegetarian black bean and cheese quesadilla. He’s had it before. The generosity with the cheese makes this food item a little addictive for him.

We chased these fine entrees with beer (for him) and a glass of $5 Spanish monastrell for me. Really good value for the dollar, this wine.

We had to take go-boxes for all the food because the portions were so generous.

What was most surprising was the bill which came out to about $38 for food and refreshing adult beverages as well as tax.

Decadence and affordability. Can’t beat that.